The MLD was not very pleased with the D.VII’s and in 1925 a modification program was started for the D.VII’s that were still in service. They received a new BMW IV engines of which twenty-five were bougth. Along the new engine, they received a number of other modifications like a retractable radiator under the engine, a more styled cowling, and a headrest behind the cockpit.

The MLD D.VII’s suffered also from a lot of mishaps. Most of the time the damaged aircraft were repaired or re-built using parts made in the MLD workshop. In 1930, a new D.VII was built by the MLD workshop. This became the ‘D-40’. The last MLD D.VII was withdrawn in 1937. 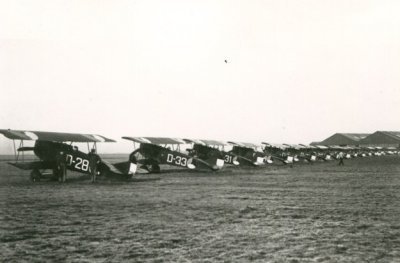 The MLD Fokker D.VII ‘D-28’ was destined for a Dutch aviation museum and stored. In 1940 it was found by the Germans and propably taken to Germany.