The first source of D.VII’s for the LVA, came from internments of aircraft that landed on Dutch soil. The first one made a forced landing near IJzendijke, and was probably put into service as the ‘F.227’ (The interned aircraft received a letter which designated the manufacturer, followed by a number). How, when and where it was used is not known. On 13 november 1918, after the Armistice, five D.VII’s landed near Stein. In some literature it is stated that two of these were put into service as the ‘F.228’ and ‘F.229’, but this is not true. These D.VII’s were not used at all, but where stored in a hangar at Schiphol together with other interned aircraft. Somewhere in the 1920’s they all were scrapped. 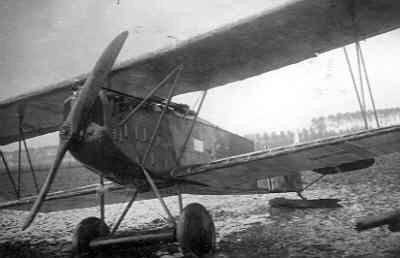 A number of LVA Fokker D.VII’s at Schiphol with the orange roundel. Fokker F.II prototype in the background.

Four LVA Fokker D.VII’s in formation with a Fokker C.I

Besides these, there also was the D.VII, registered as ‘F.600’. This was a D.VII given to Lt. Versteegh from the LVA by Fokker. It had larger wings, a fuel tank between the wings, like on the C.I, and a longer exhaust pipe. It was given back to Fokker when Lt. Versteegh left the military in 1935.

In the early 1920’s, a formation team was formed. Flying with D.VII’s, they first appeared at the ICAR in Rotterdam (The Netherlands) in 1922. Pilots were Lt. Versteegh, Lt. Jongbloed, Lt. van Weerden Poelman, Sgt. van der Griend and Sgt. Bakkenes. In august 1923, they went to the ILUG in Göteborg (Sweden). On their way to Sweden, they gave a demonstration in Kopenhagen. There they made such an impression, that a Danish journalist wrote :’They were flying like five fingers at one hand.’ Since then, they used this name, which is in Dutch : ‘Vijf vingers aan één hand’. During the Second International Polar Year, from September 1, 1932 to September 30, 1933, two LVA D.VII’s were sent to Iceland. These D.VII’s flew daily to gather information about the weather. Read some stories about this.